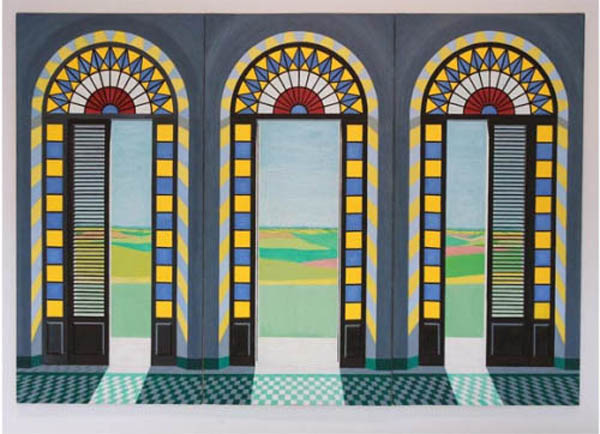 Established in 2005, the award was funded by the Emilio Sanchez Foundation for the benefit of the winner of the Cintas Fellowship in Visual Arts.

Emilio Sanchez was a beloved Cuban American artist whose works are in the permanent collection of major institutions such as Boston Museum of Fine Arts, the Brooklyn Museum of Art, the Hirshhorn Museum and Sculpture Garden and the Museo de Arte Moderno of Bogota. Sanchez, a graduate of Yale University, won a Cintas fellowship in 1989. The Emilio Sanchez Foundation was created after the artist’s death in 1999.

The first Emilio Sanchez Award was granted to Christian Curiel at the opening of the 2005 Cintas Fellows Finalists Exhibition at the Americas Society in New York. Born in 1977 in Puerto Rico, Curiel received a bachelor of fine arts at the International Fine Arts College in Miami and a master of fine arts in painting from Yale University. Curiel lives and works in New York City.

Gean Moreno received the Award in 2007. In addition to his career as an artist, Moreno is an art critic and a respected curator with a focus on emerging artists. He is a graduate of Florida International University with a bachelor of arts in philosophy. Moreno lives and works in Miami.

The winner in 2008 was Ernesto Oroza, who works in a variety of media including photography and video, and who has produced a wide-ranging series of conceptual art projects. Oroza is the recipient of a Guggenheim Fellowship as well as fellowships and awards from the Christoph Merian Foundation in Basel, Switzerland; the Danish Center for Cultural Development, and the Ludwig Foundation. Oroza lives and works in Aventura, Florida.

The 2009 award went to Gladys Triana for a series of photographs that marked a turning point in her artistic career. Triana’s many solo exhibitions include shows at the Bronx Museum of the Arts and the Museum of Contemporary Hispanic Art in New York, as well as in galleries in Paris, Lima and Santo Domingo. Triana won her first Cintas fellowship in 1993. She lives in New York City.

Endowment Awards may also be granted in the fields of architecture, film, literature, music composition, photography, sculpture and lifetime achievement.