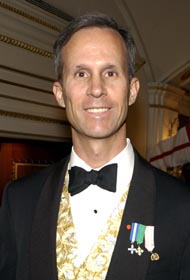 The Brandon Fradd Fellowship in Music Composition, established in 2006, was endowed by Brandon Fradd of New York City for the benefit of the winner of the music composition award.

Mr. Fradd, managing director of Apollo Medical Partners, received his undergraduate degree in mathematics from Princeton University, a graduate degree from the New College of Oxford University and a medical degree from Harvard Medical School. Mr. Fradd grew up in Miami among Cuban friends from whom he learned Spanish and developed an interest in Cuban music.

With this generous donation, Mr. Fradd has made it possible for the foundation to give an annual fellowship in music and thus support the rich heritage of Cuban music for the enjoyment of all.

First to receive the Brandon Fradd Fellowship in Music Composition, 2007-08, was Carlos Puig-Hatem of Miami. Born in Cuba, Mr. Puig-Hatem began studying music at the age of 7 and composing jazz at the age of 15. He graduated from the Amadeo Roldán Conservatory as trumpet professor and later received a bachelor in music, with a specialization in composition, from the Instituto Superior de Artes in Havana.

Mr. Puig-Hatem worked as conductor of the Children Symphony Orchestra of Havana from 1992 to 1994 and as director in the composition department at the Instituto.  He received a Master of Music degree from the University of Miami in 2010.

In 2008-09, Armando Bayolo received the second Brandon Fradd Fellowship. Born in Santurce, Puerto Rico, Mr. Bayolo has a Bachelor’s degree in music from the Eastman School of Music, a Master’s from Yale University and a doctorate from the University of Michigan. His compositions include works for solo instruments, voices, chamber and orchestral music. Mr. Bayolo is the founding artistic director and conductor of Great Noise Ensemble, and has been a guest conductor with the Rose City Chamber Orchestra in Portland, Oregon, and the Lee University Chamber Orchestra in Cleveland, Tennessee. With Adrian Castro, winner of the CINTAS fellowship for literature, Mr. Bayolo participated in a special program dedicated to the CINTAS Foundation during the 2008 Miami Book Fair International.

Sergio Barroso, a Havana-born composer, keyboard player and synthesis whose music has been performed extensively in North and South America, Europe and Asia, won the fellowship in 2009-10. Mr. Barroso’s work has been recognized at the International Music Council (IMC) Rostrums of Composers, Electroacoustic Music and Latin American Music, and the Groupe de Musique Expérimentale de Bourges. He received a composition prize from the Canada Council for the Arts in 2000.

The 2010-11 award went to Fabián Almazán, a pianist and composer who in 2007 was the winner of a ASCAP Foundation Young Jazz Composer Award for Personalities, a work for string quartet. Mr. Almazán studied at the New World School of the Arts in Miami and at the Manhattan School of Music, where he obtained a Master's degree and was a recipient of the Michael W. Greene Scholarship. He was one of six composers selected to participate in the Sundance Composers' Lab in 2011.

The Brandon Fradd Fellowship in Music Composition in 2011-12 went to Jorge Martín, the composer of the full-length opera Before Night Falls, inspired by the acclaimed memoir written by the late Reinaldo Arena, a CINTAS fellowship winner for literature. A graduate of Yale University, Mr. Martín is the recipient of an Academy Award in Music from the American Academy of Arts and Letters, and of an ASCAP Standard Music Award. The 2011 award was Mr. Martín’s second CINTAS fellowship.

The 2012-13 winner was the composer, pianist and teacher Ailem Carvajal, whose pieces have been performed at the Q-ba Music Festival in Holland, the New Music Miami ISCM Festival in Miami, the Est-Ovest Festival in Turin and at La Scala in Milan. In  2004, she won the first prize at the International Competition for Women Composers in Venice. In 2011, her piece for mixed ensemble, Okan, was commissioned by the Latin American Puente Sonoro Festival in Williams College, Mass.

In 2013-14, the winner was Yosvany Terry, a saxophonist and composer who has received commissions from many institutions, including the Ford Foundation, the Harlem Stage, the Map Fund and the Jerome Foundation. Mr. Terry has recorded with Gonzalo Rubalcaba and Manuel Valera, among others. His own recordings include Today’s Opinion and Metamorphosis.

In 2014-15, the winner was Yalil Guerra. Yalil writes music for television networks, and continues to compose and produce albums. AT 16, Guerra won the International Competition & Festival of Classical Guitar in Krakow, Poland - becoming the youngest Cuban awarded a prize in an international competition. He has worked with artists such as Cristian Castro, Celia Cruz, Albita Rodriguez, Eddie Santiago, Rey Ruiz, Choco Orta and Yamila Guerra.

In 2015-16, the winner was Ivette Herryman. Yvette has composed for solo instruments, chamber groups, orchestra, wind ensemble, electronic media, children, church and film music and musical theaters. Her music has been read by the National Symphony Orchestra from Cuba, the MSU’s Symphony Orchestra and Wind Symphony and has been performed in Cuba, Mexico, El Salvador, Spain and the US.

In addition to donating the funds that sustain the annual fellowship in music composition, Mr. Fradd has also provided for the support of the CINTAS Foundation music collection, ensuring that information and records are maintained for posterity.